I didn't get out of the house as early as I have been. I still woke up at 5am, but stayed in bed until 6am and left around 9am.

I first went to M's in Carmel Mountain to pick out some baskets for under the counter and look for some picture frames for our business licenses and return policy. It took me FOREVER to choose the frames, and wouldn't you know, when I got to the store and put the licenses in the one, I turned it over to find that it doesn't HANG! Grrr!!! I'm going to work it out though.

I heard from my window painter sign guy on my way out of M's. He's been super busy but he switched his schedule around and is going to paint our windows TOMORROW!!! Can you believe it? On a Sunday?? He's just awesome!!! Dave Yant Signs!!! Great guy!!! (and *The Best* window painter in town!)

When I got to the store, it just looked SO good!! Bonnie and Danni did an AMAZING job!! They stayed until 11:30pm last night!!!! Can you believe it? Do I have just the best staff, or what?!!!

Throughout the day, Chelsea, Danni, Tom and Mary all joined me along with Danni's SIL and we knocked it out!!! We got a LOT put out!! I checked back in a bunch more paper and the reds and pinks ribbons and all of that was put out. A bunch of other product was put out and Gigi sorted our hooks (it might sound silly, but OMG, I'm SOOOOOoooo excited to have it done!!! We need to put a lot back in storage and this will allow us to keep a realistic and accurate number in the store and put the rest AWAY!!!)

But what was just so awesome is the number of customers who stopped by today!!! Hey - I said you could, and YOU DID!!! (And we just *LOVED* it!!) We also had several people walk in just thinking we were open and started shopping (which was kinda funny b/c the lights were off - but it's naturally VERY light in there - and it was so hot because the AC wasn't working).  And, regarding the AC issue, it turns out that they actually didn't believe me that it was broken!!! But they do now and the parts are ordered and they now say it will be fixed Monday.

Bonnie had brought a big fan last night. When Tom arrived (after I learned that the AC wouldn't be fixed until Monday), I had him bring another big fan and two little ones and we set them up throughout the store just to keep air moving. And because I worried that there would be a problem fixing the AC (yeah... "not my first rodeo"!!) I had brought a few spare bed sheets and as soon as the sun came over the building, I had Chelsea hang them in the windows to just keep the sun at bay as much as possible.

Tom and I took our "lunch break" at another "neighbor": Five Guys Burgers. I've never eaten at one, so I didn't know what it would be like. If you don't know either, it's burgers and fries (they do have hot dogs and grilled cheese, too). But it's a pretty "specific" menu.  It was ok. I'm not the biggest burger or fries fan, so I can't give a great opinion here. Tom really liked his burger. He is SUPER picky about fries and these were just "ok" for him.  Fyi, it's REALLY loud in there!  But, it's the old Pick Up Stix location and it has a GREAT patio area!! Very spacious!!! Several tables.

Also, they have two CRAZY soda fountain dispensers!!! Apparently, they have been around, but I've never seen them. They are made by Ferrari and offer a bazillion options!!! It was seriously insane!! I don't know why I didn't take pictures (these pics are from the internet) but look at all of the choices for drinks!! And then, when you select one, you get several more options!!! So, for Diet Coke, you can get regular, Cherry, Lime, etc - I think there were 6 choices. And same for Lemonade. We kind of figured out the whole thing and how they could do it by the time we left and it was simply brilliant! 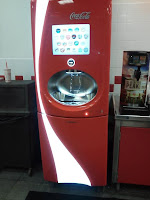 This is what the whole machine looks like (again, from the internet, but I think, by the cup on the left counter, it was from Five Guys so it's probably one of their stores). Slick though, eh?

And their Iced Tea is from the dispenser to the right. They offer 4 types - regular unsweetened, regular sweetened, green tea and one more that I don't remember.

BUT, when I asked if it was fresh brewed, the guy said "yes" - but it's not. (I'm really picky about Iced Tea)

Danni and Gigi walked down to a juice place (sorry - I don't remember which) but they brought back some more menus - we are getting a collection together!

We all left at 5pm. We have several more coming in tomorrow. I REALLY am hoping that we can open on Monday... We may only have one register up by then, though...


I don't know when Bazzill arrives but it has been shipped.  And I think a few other orders are en route! I'm sorry, but with everything going on, I've lost track!!