I must have felt relieved to be opening today, because I actually slept past 5am!! I didn't get up until 6:30am and then realized that I had SO much to do in order to open the store this morning!! So, I jumped up and got to work quickly!!

Well, both Danni and I were late to open the store.... Oops!!! But we had a very nice morning. I showed Danni all of the "start up" stuff and we got to work quickly! We were busy-busy-busy!

And we were visited by LOTS of customers today! YAY! It was so nice to see everyone!! We had lots of people come in to check out the new space and everyone seemed to love it and several thought it was actually LARGER than the last space!! (It's not, but that was really nice to hear!)

Our custom paper order did not show up today - it went to the wrong address, so it will arrive tomorrow {sigh}.

For lunch, Tom & I tried a brand new Poway restaurant called "Mainstream Bar & Grill". It's where Le Peep used to be {sniff}. I loved Le Peep and was really sad to see them close!!!!

But I will say that Mainstream (well, the owner, Harry) did an AMAZING job on the remodel!! Wow!!! It's *REALLY* nice! 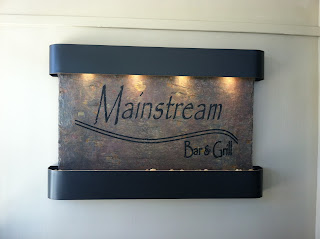 This is in the entryway - it's actually a waterfall! The center part was water running down it. And they did a really nice job with colors and décor throughout - it's very calming and fluid. Loved it.

And the owner seemed very nice.

The place is larger than Le Peep - he leased the space next to them and there is probably room for another 70 people in there? (A guess - I didn't count, but I'm thinking back to what I saw - I could be completely wrong).

We grabbed a copy of the menu (it was a rough version - he said that he is having new ones printed), but we are creating quite a pile of menus for you guys to peruse if you want to grab a bite while cropping or in between classes or whatever.

While walking over there, we stopped at the sushi place and collected a menu there too. Wow - they had some really good prices! And the food looked really good too!!!  *BUT* it was really hot and humid in there and we already had spent the morning without AC so I just couldn't do it.  But I'm eager to try them in the future. They had 4 tables inside and a few outside and there were several people there and some "take-out" people.

We tried to get a menu from the Italian place next to them, but they are closed on Mondays... And they have "funny" hours during the week (closed in between meals). So, we'll definitely need to get their info. 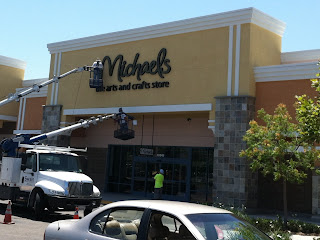 Also while walking to lunch we got to witness the new M's sign being installed... it's really nice!!

It's their modern logo.  I couldn't tell if it would light up at night or not, though. It didn't appear so - I'd be surprised if it did, but shocked that they did this and didn't have a lighted sign. 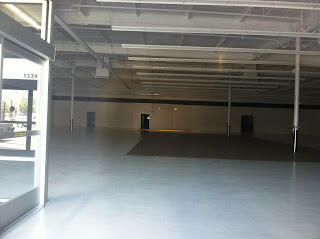 The have NOTHING done... It's a complete empty shell. They have apparently moved their opening date back to the end of August.

But it should be much nicer than the current M's. (And, I'm assuming that the AC will work... although the Five Guy's place said that theirs only works periodically and they JUST moved in, so that would be a bummer if they moved and didn't now have AC!)

While at lunch I heard from the Landlord that our AC would not be fixed until tomorrow... Grrrr!!!

And I also later found out that the doors wouldn't be fixed today and that they didn't know WHEN they would be fixed!!!

My happy feeling about the landlord is starting to leave me... I hope that they can redeem themselves!

The space was supposed to be in "good working order" and so far, it hasn't proven to be... They even said that they JUST had the AC people out to check the unit (within a few weeks of me signing the lease). Well, it's a good thing that I made sure to include that it MUST work well... I for sure don't want to be paying the repair guy!

Anyway, today, we had some "house keeping" items to attend to, so we didn't get a lot of product checked back in.

I'm "technically" off tomorrow but I'll be in and we'll get more stuff done.

And hopefully the AC will actually get fixed!!